NoMads Rooms is located in Trikala – Greece, perfecture’s capital city, 10 miles from Meteora. Built by the heritage listed traditional neighbourhood of Varoussi, known for its beautiful narrow alleys and the multi-coloured houses of the 17th, 18th and 19th centuries. Most of the oldest churches of the city as well as the famous Fortress and the Profitis Ilias grove are here.

Please have a look at the exact directions below.

From the Central Square of Trikala
As you are standing on the Central Square of Trikala you can see a fountain with a little statue of a peeing boy in the middle of the square. Pass by the fountain heading North (NOT towards the river). Now you see in front of you a big street named “Kondili Str.”(ΚΟΝΔΥΛΗ) and a big corner building of the “National Bank of Greece” on your left hand. Pass by it and just go straight ahead, walking on the wide pavement of Kondili Street. At the fifth (5th) intersection, just after the computer store “Edit PC”, turn left on”Papagou Street” (ΠΑΠΑΓΟΥ). Walk another 50 meters and NoMads Rooms, with a light sign and a big column outside, is just in front of you. Welcome!

From the train station
As you exit the train station you can see a big street in front of you. This is “Asklipiou Street”.(ΑΣΚΛΗΠΙΟΥ) Go straight ahead, following this street until its end. This street becomes a pedestrian street somewhere in the middle and you pass by the cafe spot of the city. At the end of Asklipiou Street you cross the Central Bridge and you are on the Central Square of Trikala. You can follow now the directions from the Central Square above. 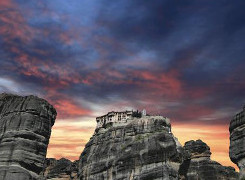 Join the ultimate sunset tour in Meteora and discover the hidden gem of this area!
Read more! 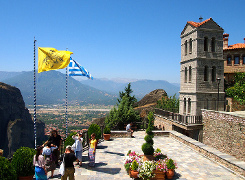 Discover Meteora on this Sightseeing Tour a perfect introduction for any first time visitor.
Read more! 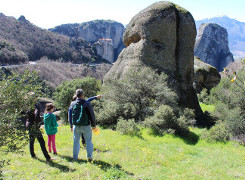 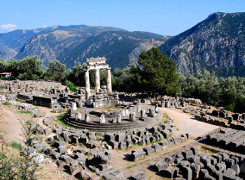 A round-trip tour from Trikala to Delphi and Thermopylae by air-conditioned car. 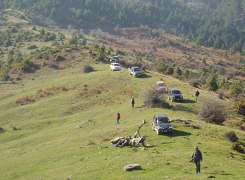 Why not extend your Meteora Adventure with an off-road 4x4 trip to the Pindos Mountains?